I'm brand new to Rainmeter, and liked the simplicity of the included Illustro theme. I decided to extend the Illustro theme to utilize the HWiNFO64 registry / Gadget interface. Also being lazy, I didn't want to hand-edit configs every time I decided to add/remove one of the monitored items in HWiNFO64. Hence, a basic Powershell script to generate configuration files was born! 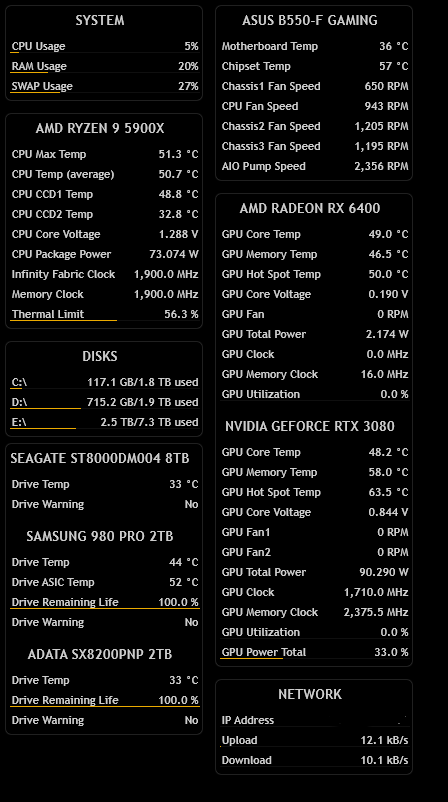 I didn't spend the time to make my script super user-friendly, as it is completely customized to my machine right now, but with relatively small changes it should be useable for anyone else that wants to try it.

I just got back into Rainmeter myself. I found your script and immediately knew this was a perfect solution. Thanks for putting it together.

I can figure out the $map section by swapping my information from HWINFO64, however I cannot figure out what I need to do for the $config section. The readme indicates "and set the $config name where they will be sent to."

Do I need to point to the skin directory? Or does this have something to do with the HWINFO values? Or something else entirely?

I've been trying to figure this out all day, so any assistance would be great.

Glad you like it. The $config section really is just making the different groupings to put things into. For example, HWiNFO has like 2-3 sections for my CPU. You can pick and choose which names map to each section. Each section is written into a separate directory for Illustro, so you can activate just that section. The script should auto-write out to your My Documents folder -> Rainmeters\Skins\Illustro -- then to a different "HWiNFO64-<grouping>" folder. 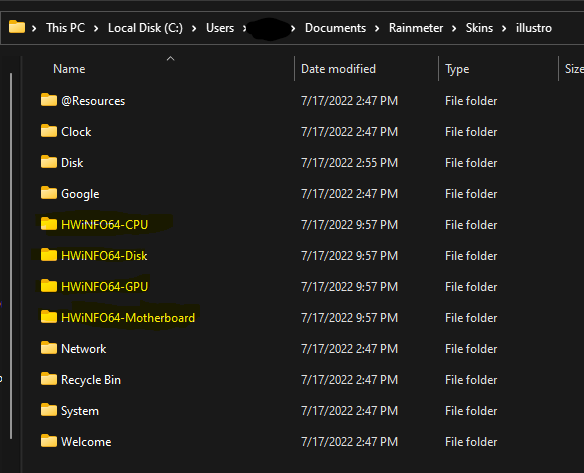 So really, what is on the right side in the map just needs to be duplicated down into $configs and $yvalues.

So that's CPU, Motherboard, Disk, GPU that go into $configs and $yvalues. These are arbitrarily named -- you can name these categories anything you want.
Top

This looks really cool. Does it utilize the new method of integrating with HWiNFO64 (i.e. no need to manually start memory share every 12 hours)?
Top

According to the OP's description, it uses the new method which takes advantage of the Sidebar Gadget interface instead of shared memory.
• Gadgets • Wiki • GitHub • More Gadgets... •
Top

SilverAzide wrote: ↑October 23rd, 2022, 3:19 pm According to the OP's description, it uses the new method which takes advantage of the Sidebar Gadget interface instead of shared memory.

You answered me twice today. I can't thank you enough.
Top

Hi, I've grabbed the script and allowed it to run. However I get a large number of errors as per below. Any ideas?

I suspect whatever you ran is not a Powershell script. Verify it is a valid script, or post it here if you are unsure.
• Gadgets • Wiki • GitHub • More Gadgets... •
Top
8 posts • Page 1 of 1