I wanted to resurrect and highlight this great tool addition to Notepad++ by mr. derek... Thanks!

This will display all of your skin sections in a sidebar for quick access; a great addition for editing larger skins!

Thanks so much for this syntax highlighter, I love it!

I just thought I'd contribute my findings - I use the function list in Notepad++ to navigate quickly around a big ini file, but couldn't figure out how to get it to work with a language that was installed as a plugin (such as Rainlexer). The following worked for me:

Open up functionsList.xml and go to the associations section (pictured). Be sure to make a backup of this file before you save any changes. 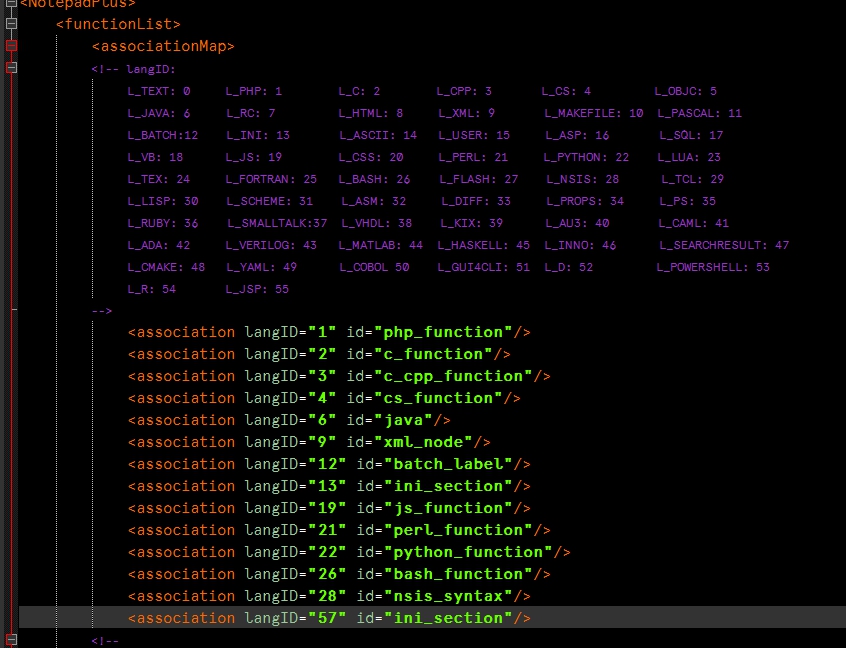 Now this next part will depend on how many languages you have installed. I only had one (Autohotkey). The system languages as documented in the XML file go up to id 55. So with AHK at id 56, Rainmeter took up id 57. The function parser for my purposes was the same as an ini file where [...] defines the function. So the association statement you enter is:

You may need to adjust the langID number higher or lower depending on your setup. Worst case start with 56 and increment up by 1 until the functions list starts working for rainmeter files. 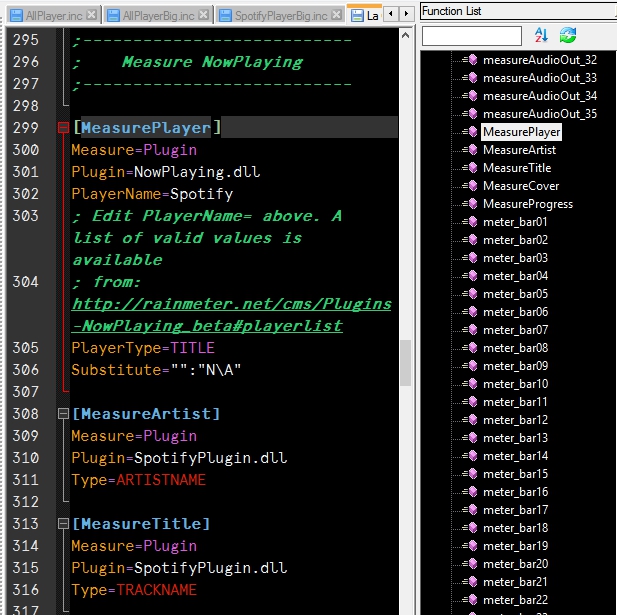 Finally, I use a black background in notepad++ for everything so I'm attaching my styler data which works for the Vibrant Ink theme (or any other black background theme). As Rainlexer is a plugin you have to go to %AppData%\Notepad++\plugins\config\RainLexer.xml

Open it up and at the bottom you will see LexerStyles. Make a backup of this file and then replace the following style with the one there for a black background style (all dem zeros).

Thanks again for the plugin and for the work in maintaining it! I'm still very new to Rainmeter so please correct me if I'm wrong in anything.

Somehow I missed original post. Thank you that you resurrected this and huge thanks to mr. derek. Now I can easily navigate through my big skins with 25000+ meters.
deviantart.com/activecolors
Top

I recently updated Notepad++ to v7.5.1 and lost my FunctionList association for Rainmeter file [Sections].
This is to be expected because languages are added to Notepad++ and the langID will change for ones added by end users.

Normally, this would be a simple matter of: My advice is "Don't get discouraged" if you have to increase that number quite a bit to get the association working again...
I had to increase the langID by almost 30 numbers before it worked; originally it was 58 ... now it is 85

Depending on how often you update Notepad++, just be aware that quite a few languages may have been added to it's library.

The association number for the Rainmeter language may need to increased significantly to get sections to show in the functionlist.

The above quote is from this thread.

I'd love to hear from anyone else on Notepad++ v7.5.1 who successfully got this working.
Top

RiseUp wrote:The above quote is from this thread.

I'd love to hear from anyone else on Notepad++ v7.5.1 who successfully got this working.

Starting at id=56 and increasing it by one. After saving the file, you have to close Notepad++. Open it and open a skin to see if the functionList.xml is displaying sections in the sidebar Function List.
np++functionlist.png
It took me 30 changes to get it working. Here is my edited functionList.xml association section...
np++functionList2.png
Hope this gets it working for you too!

When I tried this method earlier today, I made sure to edit the correct copy of that file—the one in AppData\Roaming.

I did finally get it work, though!

The reason it didn't work then is that the AppData version of the functionList.xml file did not have the ini_section parser. I innocently

assumed that because the parser was already in the Program Files version that it would still work as Notepad++ would essentially merge the two copies. Well, I was wrong.

For anyone else reading this with the same problem I had, ensure that you have the ini_section parser in that same functionList.xml to which you are adding or editing the association tag.

Thank you very much for helping me out with this, eclectic-tech!

Thanks for that additional info. Glad to hear you got it working!