I have started playing DCS:World about a year ago and fell in love with aviation and the F/A-18C Hornet. It was about the same time that I discovered Rainmeter and began using some meters.
One thing led to another and here I am making a F/A-18C inspired skin.

The backround pictures are 3D-modeled by myself in Blender, textured and rendered out in Substance Painter. The code is mostly my own, though two key features are based upon the work of @Smurfier (RainCalc 2.0 https://www.deviantart.com/smurfier/art/RainCalc-2-0-320922996) for the Calculator and @Connect-R (Unfortunatly I can't find the meter right now

The skin includes 2 DDIs (Digital Display Indicators), a UFC (Up Front Controller), a Killswitch, a CPU-Altimeter and a Network-Variometer as they are found in the McDonnell Douglas F/A-18C. 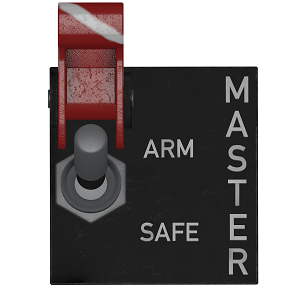 The DDIs currently include 3 pages, both DDIs are the same. The pages are:

The UFC is mostly a calculator, using left and right click to input the calculations. This might be a little unrealistic, but get's the job done quite well. The operators and the . are operated by right clicking, the numbers, ENT and CLR with left click.

All Buttons on the UFC as well as the DDIs play a little sound when pressed.

The Killswitch has it's own sounds, taken from a real killswitch. It opens and closes it's cover when hovered over, latches into ARM when pressed (and executes whatever you set it to) and slams the cover down (switching the switch to SAFE) when doubleclicked.

The CPU-Altimeter is an analog way to show CPU-load. It's very choppy since the long hand only displays full percent, but it gets the job done.

The Network-Variometer has two hands and shows both upload and download in their respective semicircles. Also rather choppy, but better than the CPU-Altimeter.

Coming features will include:

-A setup screen to change the scale of the different meters (Gear-symbol on the UFC)
-Programmable Buttons under the main UFC (Currently unlabeled)
-A sort of BIT screen for the DDIs showing what programs are started and a way to start them (I use this for DCS:World since there are about 6 programs apart from the game that have to run)
-Maybe another Meter styled like the HUD (Head Up Display) with an analog clock styled like the A/G reticle, among other features


You guys let me know what you think and what other features you'd like to see in this.
Top

I may have missed it

... can you provide a link to your current skin so we can play with it?

Sorry, there is no link yet.

All of the paths to the pictures and sound files are not set up correctly and there are a couple of things I want to get done prior to uploading it. I also want to test it on a second system.
Top

All of the paths to the pictures and sound files are not set up correctly and there are a couple of things I want to get done prior to uploading it. I also want to test it on a second system.

ah, okay! I understand the "not ready for prime time" status and will wait.
Looking great so far!

How come coding for rainmeter is so damn addictive? I fill nearly every free minute with this project now ^^

So there have been some advancements and changes:

UFC:
- SIN, COS, TAN, SQRT and LOG are now a thing
- The Time, CPU and RAM fields can now also display date, clock rate and curRam/totRam respectively
- The COMM1 rotary dial now changes volume by mouse wheeling over it

DDIs:
First off I learned about the Hiding/Showing functionality. Yeah, great stuff. ^^ I only wish I had known that three weeks ago.
Fueled by this excitement I expanded the DDIs by a couple pages:
- CHECK LIST: This is where I've got my DCS Checklist in the style of the BIT page in the F/A-18C hornet. NOT RDY is blinking, RDY is steady.
- MUSIC: This controls Spotify for me, has a shortcut to launch it and can change volume. There is also a bar visualisation. I tried a real visualiser first, but whatever I did the CPU kept tanking like crazy. More on that front later.
- INFO: Since the LOAD page is getting too crowded I expanded it into another page. This page is going to contain Harddrive and Battery information, there'll also be a shortcut to clean the trashbin.
- LNCH: Simple page to launch programs, I'll mostly use it for all the modding programs like Blender, Substance Painter and the like.
- NEWS: This will display Google-News. I'm using the code written by Ninjaki8 for this. Does not work properly as of now.
- WEATHER: This now has some world clocks for LA, NY, Moscow and Tokio.
- LOAD: The Network part now has got Ping information (to Google.com) and is gonna get IP and Gateway things.

The WEATHER page is broken since the whole wxweather thing. I'm looking into converting this to the regex made by xenium, but no luck yet.

Now to a question: What about performance?
Since this is my very first skin I have no experience in handling performance and what works and what doesn't.

So: What are good Update rates? Obviously the clock(s) need (at least) 1000, but what about the rest? Does it pay off to set -1 to everything that doesn't need it? Or does it not take much performance to update Text every second?

Also: Line count. This might be a big coding-no-no but the entire code for the DDIs is one file. That's 2664 lines of code. Does this impact performance?

I'm currently seeing about 10-20% CPU load by rainmeter in the windows task manager, which is a little much for my taste.
Top

Now this is a skin I'm excited for. I'm new to coding with Rainmeter, but I have some experience with Lua, JavaScript and HTML (as for languages that might be relevant to working with Rainmeter, besides that I know some C#, Java and Python). If you happen to need someone to help look over some of the code at some point, I might be able to help in my free time. Looks amazing so far!
Top

Some more progress! I've implemented the HUD, as seen in the F/A-18C, as a clock with RAM and CPU information.

The circle looking thing in the center is the air to ground reticle for the M61A1 gun or unguided missiles repurposed as a clock of sorts. The circle is filling clockwise to show seconds.
The compass tape at the top is also a clock, showing hours. The logic behind this is far from perfect, but it'll be improved as time comes. As soon as this is finished I'll also implement the pitch ladder for minutes. These three elements will make for a very unique clock showing hours, minutes and seconds.

The backround image is also not quite finished, I feel like the quality is quite a bit lower than the other displays. I'm currently having some trouble to render out glass in substance painter, making this rather difficult.

I'm currently looking for a good font to use in the DDIs. The recently used LCDDot is not really what I was looking for, but then again I'm not sure what I'm looking for.
Something akin to the real DDIs, I guess. This is rather hard to find though.
Top

TheGreatK0rnholio wrote: ↑
January 30th, 2020, 7:17 pm
Now this is a skin I'm excited for. I'm new to coding with Rainmeter, but I have some experience with Lua, JavaScript and HTML (as for languages that might be relevant to working with Rainmeter, besides that I know some C#, Java and Python). If you happen to need someone to help look over some of the code at some point, I might be able to help in my free time. Looks amazing so far!

Thank you very much, I might come back to this at some point. I have pretty much no experience in coding at all, this is pretty much my very first coding project.
So there might be some problems that I can't overcome myself, in that case I'll hit you up. Until then I'm enjoying the whole problem-solving part of it. (:
Top
8 posts • Page 1 of 1