What Do You Use To Make Graphic Elements?

Post reviews, recommendations and questions about other software.
13 posts 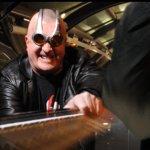 What Do You Use To Make Graphic Elements?

I'm a big Xara fan. I've been using it since v2.0 in the late 90s, when it was really just a faster, lighter CorelDraw. These days it is an absolute powerhouse, all but replacing Illustrator, Photoshop, Flash and Dreamweaver in a single interface. It also remains very slick and it saves tiny files compared to the mainstream applications. Photo editing is non-destructive and you can even apply Photoshop filters to vector shapes. Its not as cheap as it used to be but compared to Adobe CS it is still very cheap. It makes me wonder why I bothered spending my own money on CS4 a few years ago when I only ever use After Effects.
Top

You seem like you have much more experience than me in this field, but to answer your question, I use the latest Photoshop (currently CS6) for my daily graphic design needs.
Last edited by KreAch3R on August 1st, 2012, 1:28 pm, edited 1 time in total.
Inactive, due to life changes. Send me a PM for any question.

I have a copy of Photoshop CS4 that's still serving my (moderate) needs. I haven't tried much else, so I can't really say what the pros and cons are. Often, all I need to do is scan a hand-drawn sketch and clean it up a bit, although someone very kind gave me a Bamboo tablet last Christmas, so I've been (very, very slowly) learning how to use that in place of pencil.
Top

For simple shapes and elements I use Photoshop CS2 but if I need some really cool effect/background/animation/etc I use 3DS Max 11. I am big fan of minimalistic, intuitive designs so I don't use it that often.
Top

For simple stuff, I use Sumo Paint.

Gimp replaced PaintShop Pro 9 which I used for many years. This was because later versions were crap and 9 never worked with Aero.
"Regrettably your planet is one of those scheduled for demolition"
Mike

I'm using a slightly clunky combination of Micrografx Picture Publisher 10 (for most editing tasks) and Corel Photo-Paint 11 (for alpha channel editing and png export). Photo-Paint is a newer version of PP10 but I simply can't get happy with the new UI. They're pretty old products, but I've used Picture Publisher 7 for years and years until I upgraded to Windows7/64 which broke the old version (16-bit installer). Got them almost for free. I can do anything I want. I just installed Gimp on my Ubuntu laptop but haven't played with it yet.
MaroonED
Top

I learned on CorelDraw v3, which I got at the Australian equivalent of Best Buy for $150 in 1997 or '98. 8 or 9 years later that entitled me to upgrade pricing to v10, which I was very impressed with. I think Corel's underdog status makes them try harder and PhotoPaint is better overall than Photoshop, I reckon. It is faster to work with and has some nice tools. I eventually had to bite the bullet and buy CS4 though, just for work. I use CS5.5 at work and I've played with CS6 but I can't see a single reason to upgrade. Realistically, there are only one or two tools in CS4 that weren't in Version 5 that I ever use. Unless/until they get around to doing something radical, which they seem completely disinclined to do, I'll be happy with CS4.

I've used GIMP a bit in the past and I think it is very under-rated. The right-click workflow is very fast and intuitive. The trouble with pixel-pushers is that Xara makes them all feel old-fashioned and useless. Xara just gives me so much more flexibility to experiment and shuffle ideas around.

Its a skin I made for the music software my band uses, all done in Xara, and I reckon a Rainmeter skin based on this look would be pretty good. It would give my desktop some depth and realism.
Top

Bones wrote:Mostly I've been wondering why pretty much every skin looks flat and graphical and I was wondering why no-one has done anything like this...

"Minimalism" and "simplicity" have been the fashion in UI design for the last few years. In fact, that trend started about the same time that Rainmeter's popularity took off, so there's never really been a time when cleanliness hasn't been in style around here.

Photorealistic textures make me think of late-90s and early-00s. I'm not saying that's a bad thing, of course - everyone has different tastes. Me, I look at that mixing-board skin and it just gives me a headache. But there has been some really polished graphical work in Rainmeter skins. A few examples from a brief search:

There are plenty of skins that display neither minimalism nor simplicity but they still look flat. OTOH, there are skins that display both yet manage not to look too flat. The iSteve skin featured on the Rainmeter home page would be an example, although not a look I favour.

Personally, I tend to flip from simple to complex designs almost at whim, although I always prefer to keep my colour palette very simple - two colours with maybe two or three shades of one but not the other, so 3 or 4 colours in total.

Orion has many limitations that I have to work within. All the knobs have to be the same on most instruments and I can't change text colours (or anything else) on read-outs. It also needs to work within the application. Whenever I have to choose, functionality will always win out over aesthetics and the biggest challenge to functionality is size, which is also the enemy of minimalism and simplicity. i.e. If you have to display 74 controls, the most aesthetically pleasing way is to spread them out but if you have a song with a dozen instruments plus effects, you run out of screen real estate very, very quickly. Of course, what you see in that image is not how the application would look in action. I've jammed as many bits into a small space as I can.
Top
13 posts