Hi all, I have updated my TenPlayer and TenSystem widgets to version 4.1.1, which includes new features and variant skins. In particular, by popular demand I have made TenPlayer capable of supporting Spotify; check them out: 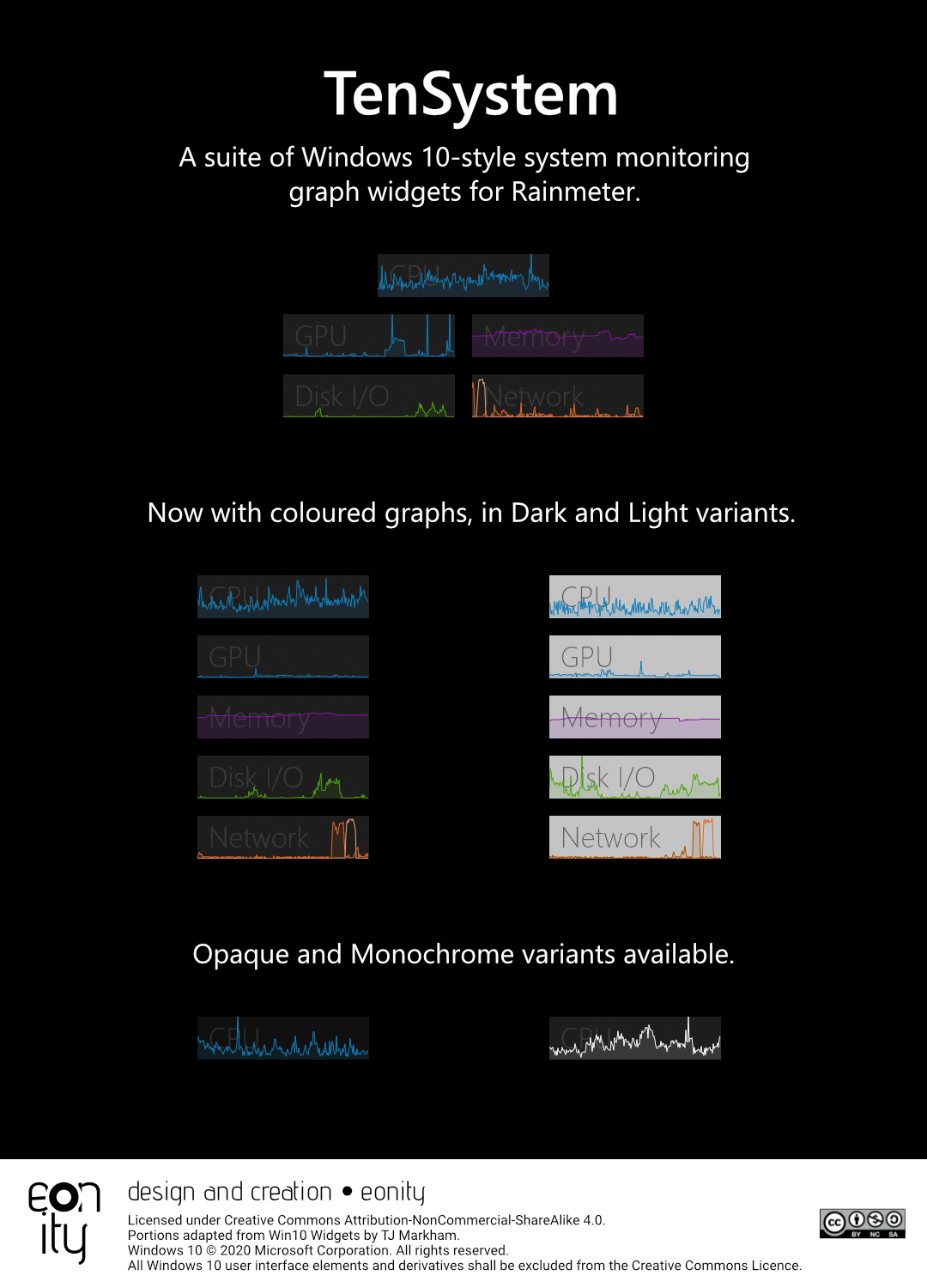 In addition, I am making a call for beta testers to help test version 4.2 of my TenSystem widgets (the CPU widget specifically). In particular, I'm looking for those who are able to test my widgets on a system with an AMD CPU, in a virtual machine, and those running very high-end devices/systems with two physical CPUs (i.e. two CPU sockets).

The reason is because:
1. I'm making a change in how the CPU base frequency is measured in version 4.2 of my CPU widget. Rather than retrieving the value from the registry (HKEY_LOCAL_MACHINE\HARDWARE\DESCRIPTION\System\CentralProcessor\0), I have switched it to retrieving the value from PerfMon via the UsageMonitor plugin (Processor Information object, Processor Frequency counter). While I believe this value is static and reflects the base clock speed of the CPU (as it is on my Intel system), I am not 100% sure about that, and I need people running AMD CPUs on their systems to test this out, as well as within virtual machines (where especially this counter might behave differently).
2. More importantly, I'm doing something that probably will be needed by very few people, but I just want to cover all my bases: a new CPU 2 widget, specifically intended for those with two physical CPUs on their systems. In version 4.1 of TenSystem, I updated the CPU widget to explicitly measure CPU usage stats from only the first physical CPU, if used on a device or system with two physical CPUs installed. Outside of workstations and servers, I doubt most (if any) people will be running a system with two physical CPUs, and for most cases measuring just the first (and only) physical CPU should be enough. But - as I said earlier - I want to cover all my bases, and in the event someone wants to use Rainmeter to separately monitor each of their two physical CPUs on their high-end system, I want my TenSystem suite to be capable of doing that. Therefore, I have crafted an experimental CPU 2 widget, designed to monitor usage stats of only the second physical CPU on a system with two physical CPUs installed. Obviously though, this widget will not work at all on my single-CPU system, and I'm hoping someone happens to have a system with two physical CPUs that can help me test this widget.

Download:
TenSystem_4.2 Beta.rmskin
You do not have the required permissions to view the files attached to this post.
Top

Really love the aesthetics of these skins. Would like to switch to the TenPlayer but I would need it to support Spotify album art.

I currently use this skin, which like others requires that Spotify be modified by Spicetify to integrate the WebNowPlaying extension, and this is an easy process.