Hello, im from Germany and i search a Rainmeter Application to see the best Gas Prize. I found one like this 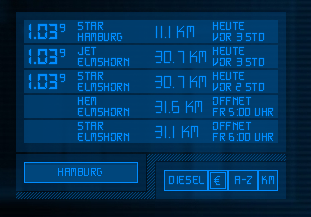 but didnt found any download link or tutorial. Unfortunately i have no skills in Rainmeter or Programming, so my question is there something like this to download?
Top

It is. This guy did couple of these skins.

The original design comes from this: http://g3xter.deviantart.com/art/BlueVision-V0-2-Alpha-RAINMETER-162478234

But he changend some functions, and added new ones, like the Gas Prizes.
Top

i would write him maybe he still has it some where....

Out of curiosity: who is that guy?
FreeRaider

g3xter is old member of 2010 made nice skins is still on deviantart.com so it's a urly birds he was talking about rainmeter 2.1
so far as i know

and already worked with jsmorley on scripts then

but the scripts of gasoline is not to be found
only the 1.0 and 2.0 version of blue vision on the web that doesn't incl the parts that he wants..